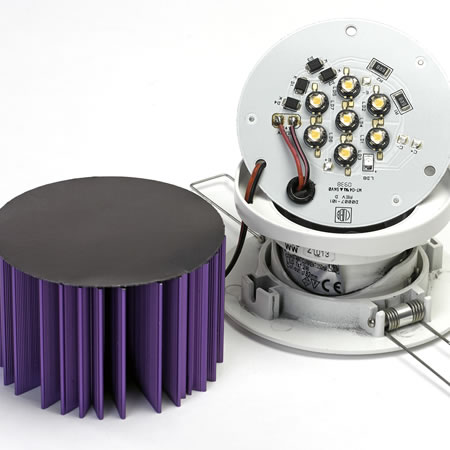 The use of LEDs a rapidly growing but their thermal management needs to be understood.

The LED market size is growing rapidly. In 2018 it was valued at $ 45 billion and with an annual growth rate prediction of almost 12% the market size could reach $ 105 billion by 2025.  LEDs are reliable, extremely efficient and have a long life typically delivering 50,000+ hours of illumination with low energy consumption. With such advantages it is easy to see why the growth in automotive, domestic and industrial lighting applications will continue.

When using LEDs it is important that designers and engineers understand what is required regarding their thermal management. Keeping LEDs cool is essential to ensuring the devices operate to their full potential over a long working life.

When operating, approximately 70% of the power added to a LED is converted into heat rather than light.  To keep temperatures at acceptable operating levels the heat needs to be removed quickly to avoid product failure issues.  50,000+ hours of working life of a LED is often calculated in manufacturers ideal laboratory conditions.  Beyond the laboratory it is relatively easy for lighting assemblies with poor thermal management to run hot causing a lower light output and even failures.  Its life expectancy can be closely matched to operating temperature and the life can be doubled by a 10°C reduction in operating temperature. Additionally, assemblies that run too hot can also damage other electronic components in close proximity.

The main method or thermal management for LEDs is the use of Insulated Metal Substrate (IMS) PCBs. These boards are sometimes called MPCB (Metal Printed Circuit Boards). The laminates consist of three parts. The top layer is the copper layer that is processed into the electrical conductors as per conventional PCBs. The middle layer is the Dielectric which is the key part. This is the substance that both electrically isolates the Aluminium base layer from the copper foil, but also allows for rapid heat transfer between the two. It ensures that the heat generated in the components is dispersed to the heat sink as quickly as possible and determines the materials overall thermal properties.  The most common base layer is aluminium as it is a very efficient conductor of heat and as such is perfect for applications involving rapid heat transfer.

In choosing a supplier of IMS boards the two critical considerations are the material used and the quality of manufacture.  The Dielectric is the ingredient of the substrate that sets apart a world-class material from the cheaper alternatives on the market. As well as using the best IMS laminates available DK-Daleba also owns a world-class Asian manufacturing facility managed and run to accredited Western standards.   The highest quality materials and manufacturing methods will produce a product that offers highly efficient thermal management of LEDs with unparalleled reliability. This is essential in high-value assemblies such as automotive and LED lighting where servicing may be costly; for example, in difficult to access locations.

Even if a good quality IMS board is key to LED thermal management it is not the full story. In most instances, an appropriate heatsink should be used to further conduct the heat away. This is even more important if the assembly is in an insulated small space. As is the case when any heat sink is used air gaps need to be removed as air is such a poor thermal conductor. Any surface is rarely smooth; for instance, a metal heat sink might have grooves in the surface from its manufacture. If two rough surfaces are mated, air will be trapped between, causing poor thermal conductance. This issue is solved by using thermal interface materials; by filling those gaps with a thermally conductive material.

For LEDs Graphite is the most popular Thermal Interface Material.  It is a high performance and cost-effective material and is used where electrical isolation is not required. Its unique grain-oriented structure allows it to conform exactly to surfaces, thus maximising heat transfer. With very high thermal conductivity of 300W/mK, graphite is the chosen thermal interface material to use between metal-based PCBs in LED lighting assemblies and heatsinks. The EMI Thermal division at DK-Daleba stock rolls of their graphite which is converted in the UK and supplied as any specific size gasket their customers need.

You can now order many of our products from our online store available from stock for fast UK delivery. Plus enter your email address below and sign up to join our EMI VIP CLUB for FREE! As a member you will receive regular Mailers outlining product information, receive previews of new products plus special offers and discounts - join today, enter your email below!